This just in! Yesterday the ‘gram unveiled IGTV at its event in San Francisco, California. What’s this you must be wondering? Instagram TV is a new service that has been developed for long-form videos that come from professional Instagram creators and the general public. Watch out Youtube, you now have competition!

IGTV will not only exist on the main Instagram app, but it will also have a standalone app solely dedicated to IGTV. Kevin Systrom, the Instagram CEO, stated the following about IGTV: “It’s time for video to move forward, and evolve.” Evolve it will-the new IGTV will become a core part of the current Instagram app and the new app will allow ‘grammers to focus solely on the IGTV videos.

How will it Work?

IGTV will allow anyone to be a creator or create their own channel. You won’t have to be a big-name creator or celebrity to upload a video. Right now, Instagram videos have a one-minute long time limit. After IGTV is rolled out, users will be able to upload videos that are up to an hour in time. However, it should be noted that smaller and newer accounts won’t have the option of publishing an hour long video. Their time length will increase to ten minutes. Though, with time the ten minutes could become an hour.

The IGTV app and the in-Instagram experience will rollout immediately across the globe. Are you curious as to what to look for on the current Instagram app? If so, the answer is just ahead. A TV shaped button will be placed above Stories. Viewers will be able to scroll through a plethora of long-form videos. Users can even swipe up to a Browse tab, which will show the user popular videos, personally recommended videos, and videos from creators that the user is following. Additionally, viewers can watch videos that they had previously started and they will receive callouts from the IGTV button that alert them about new content!

Creators will be able to create channels that are full of videos that people can subscribe to. Further, links can be added to the description of creator’s videos so that traffic can be driven elsewhere. 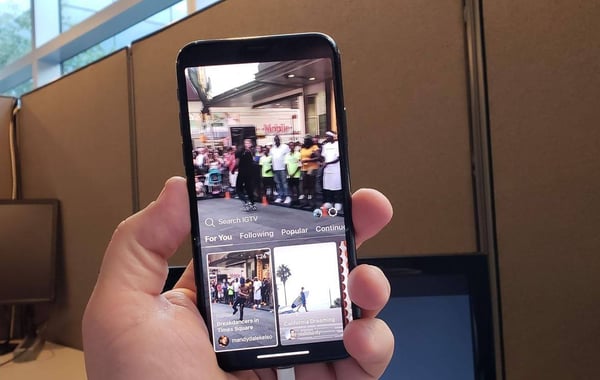 IGTV Commercials? Not Yet!

At the launch, IGTV will not feature ads and right now the ‘gram doesn’t have any revenue share agreements in place with creators. They are focusing on building engagement first and they will later focus on other aspects like commercials. That doesn’t mean that advertisements will never become part of IGTV. In fact Systrom suggested, that Instagram is “obviously a very reasonable place [for ads] to end up.”His reasoning behind this is the fact that creators will put lots of time and effort into IGTV videos, so he wants to make those endeavors justifiable with monetary incentives. Another thing to consider moving forward is that Instagram will not be paying creators directly for IGTV like Facebook did to kickstart the Facebook Watch video center, which is now ranked.

To One Billion and Beyond!

At the event, Systrom revealed that Instagram now has one billion monthly users. Yes, you read that right-one billion. This is the first number reveal since September of 2017, when they had just 800 million monthly users. With this many users, IGTV could become popular with creators who are looking to grow their audience and earn some cash. As mentioned earlier, monetary compensation is not in the plan right now, but we can expect to see Instagram build a monetization option for IGTV creators, which will drive up Instagram’s success even more.

Throwback to the days that Instagram was a simple app for sharing filtered photos. I can hardly remember those days now, because Instagram has progressed so quickly! Back then, the social and technological world weren’t equipped for longer-form videos and frankly neither were the users. Oh how the times have changed! We continue to see the decline of actual television, so as usual Instagram looks to solve the problem. IGTV will become the TV of mobile; there will be no need to watch TV on a big screen at home. Your TV will come with you wherever you go! Instead of just scrolling through Instagram feeds all day, your small screen can become a place to watch something great.

Sociallyin is on IG TV! Are you? Check us out here.

Community Coordinator with a passion for travel and a love for learning. Born and raised in South AL, but loving the city life in Birmingham!