How to be a Social Media Influencer: Your Complete Guide

How Can I Become a Successful Social Media Influencer?

Being a social media influencer means finding and embracing your community in a way that fosters trust and friendship between you and your followers. If you want to be successful, the friendship and community have to come before the advertising. The real secret to a successful strategy is learning to be real with your followers and find out what they want to see from you to keep the conversation flowing freely.

If you want to become a true social media influencer, this complete guide is only for you!

Did you know that when it comes to online shopping, a staggering 74% of people trust social networks to guide them to their purchase decisions? And with more than 3.196 billion people around the globe actively using social media, (which is around 42% of the world's population); this means than billions of people everywhere are looking to friends, acquaintances, colleagues, family and social media influencers for the information they need to decide whether or not a product or service is worth the purchase.

But Who and What Counts as a Social Media Influencer?

Influencers typically have a very dedicated following because they’ve taken time to build the trust of their audience and have learned how to effectively utilize their authority, knowledge, and power within a given industry to engage.

The thought behind this is that people think micro-influencers are going to be more honest and open and less likely to be pitching a product for the sole purpose of getting a return. And besides this, with a smaller sphere of influence, micro-influencers can better connect and engage with their audience, which builds better, more trusted and longer-lasting customer relationships.

Becoming an Influencer: Find Your Niche

The first step in the process of becoming an influencer on social is finding the place where you will make the most impact. The thing that you’re most passionate about. Your niche.

Sometimes, it can be hard to figure out what that really is and how to know if you’re not already doing it, but the secret is more thought and less stress.

Try to find something that people are always going to want and need. Don’t embrace an aspect of one industry and then not move on and improve as time goes on, because as technology gets better and better, you’re going to be left behind.

Don’t embrace virtual reality masks and then not find a way to make it better and bring it out of the mask and into the room. The secret to finding a niche that’s timeless is not finding something evergreen. It’s finding a way to evolve and stay on top. Because when it comes down to the truth, providing value is what makes a social media influencer so powerful.

You’ve heard the term “content is king” but if that’s the case, you could very well say that your community is your queen in the realms of social media influencing.

If you want to be a social media influencer, first you have to find the platform that works the best for you. Whether it be Instagram, Facebook, Snapchat or even TikTok, every social media influencer has a place where they rule and can make the most impact. So after finding a niche, finding your target audience and embracing that community on the right platform is the next best and most effective step.

Something you can keep in mind when choosing a platform where you can be most effective is that 78% of social influencers across the globe used Instagram for brand collaboration as their primary social media platform in 2018.

Just keep in mind that Connecting with other people in your industry who carry a lot of influence is also a key tip in building your own social media influence. So don't jump on Instagram just because there seem to be a higher number of influencers using that platform.

And no. We don’t mean bragging, but rather the type of promoting that speaks for itself. Don’t tell people you’re a good writer, an amazing photographer or a walking history buff.

Actually put time and work into being good at what you do and who you are, and guess what? It’ll shine through!

Don’t forget that it’s the community that gets to decide when and if you’re going to be an influencer, so put your efforts where it really matters.

Planning or not planning a content strategy ahead of time can be the difference between a wildly successful campaign and very little community engagement.

And because around 43% of brand marketers identified engagement as the stand-alone most important thing when evaluating influencers in 2018, I’d say that’s a pretty good reason to step up your content game and plan for success.

The best content provides value and education in a fun and engaging way. So whether it’s weekly baking tips in a video form on your Snapchat story or a gorgeous selection of pictures from your latest review at the hotel on the beach, planning your content around things your viewers want to see will keep your followers engaged and excited about the content to come.

Being real and showing your followers your own struggles, things you’re learning and other juicy life bits through engaging pictures and videos can make your followers feel more “in the loop” and connected which translates into more trust, more engagement and eventually, a larger following.

Be Yourself and Get Creative!

Being an influencer takes work and a lot of embracing who you already are. You’d be surprised at how people will love the real you and your quirks on social media.

It’s all about being creative in the way you approach how you do what you do. Being yourself builds trust faster with people than pretending to be something you aren’t. People aren’t stupid and they can tell when you’re putting on a show rather than embracing who you are and being proud of it.

So embrace your scars, your worries, your biggest fears, your biggest joys, and your favorite sweater or torn pair of jeans and be an influencer you would be proud to follow.

Does Your Social Content Need a Creative Pick-Me-Up? We've Got You Covered. 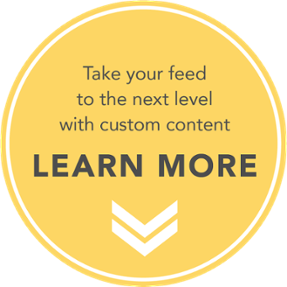